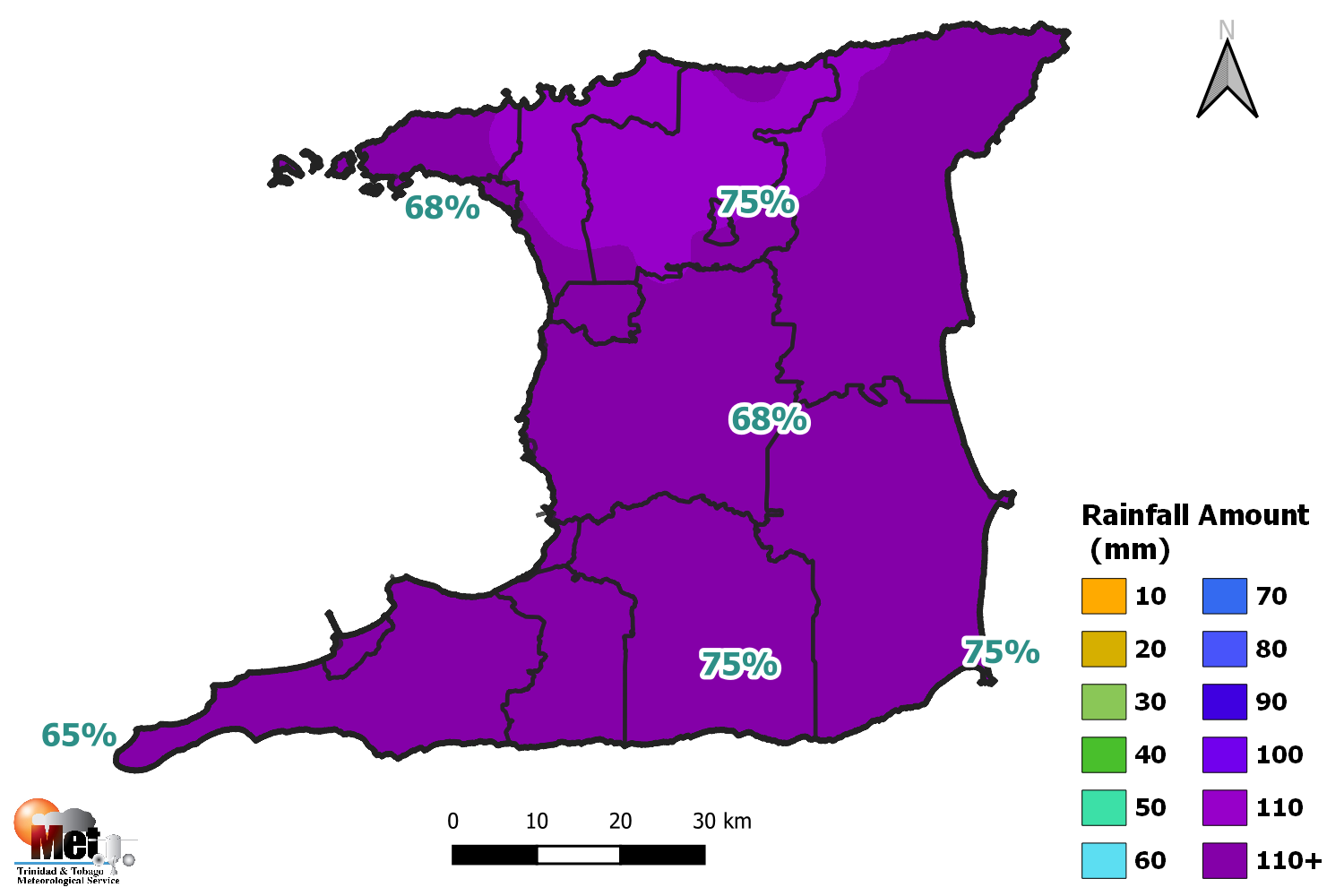 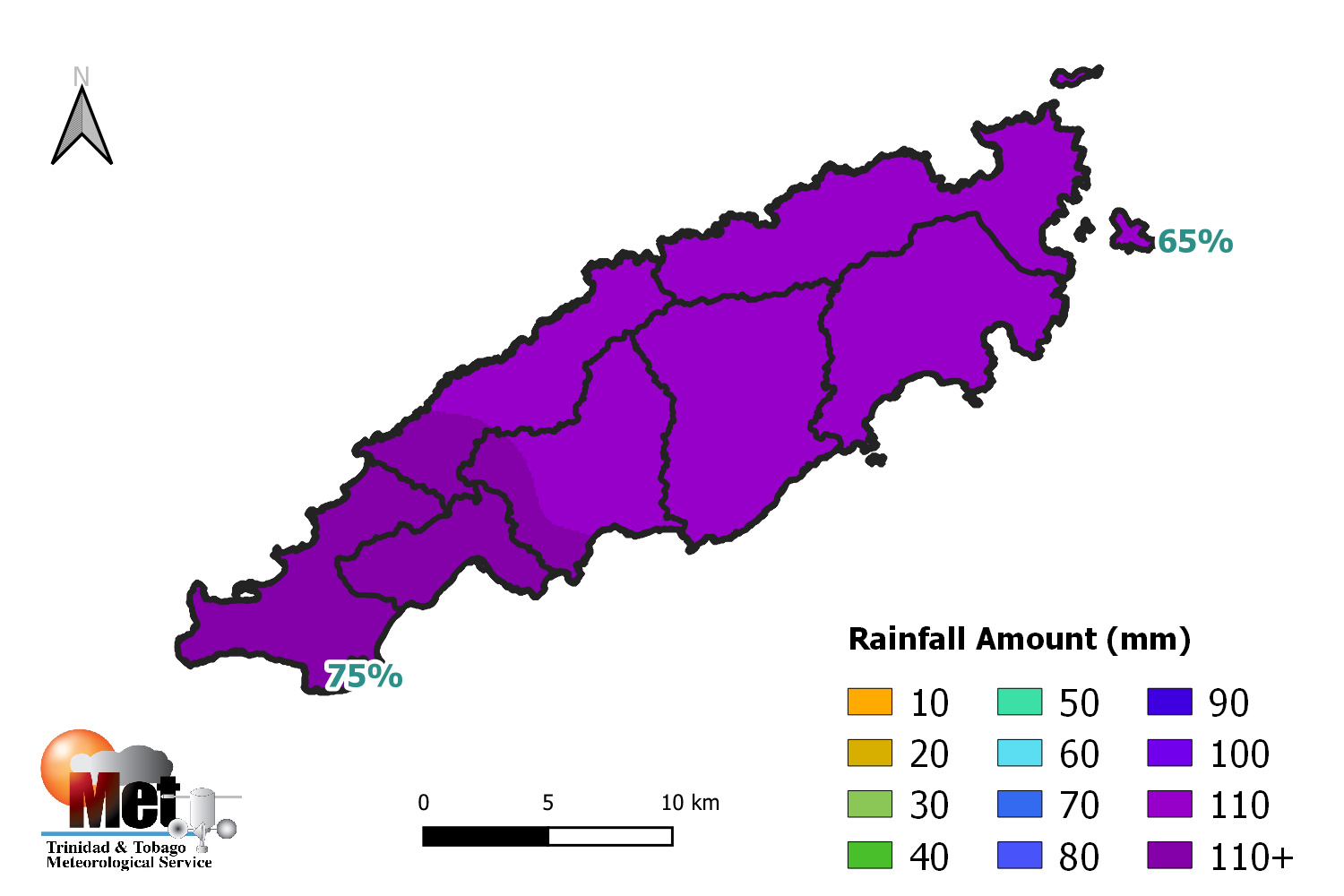 
Definitions used in the forecast and bulletin: 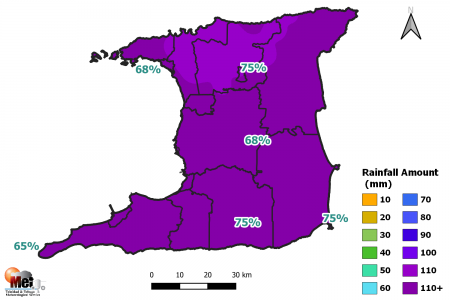 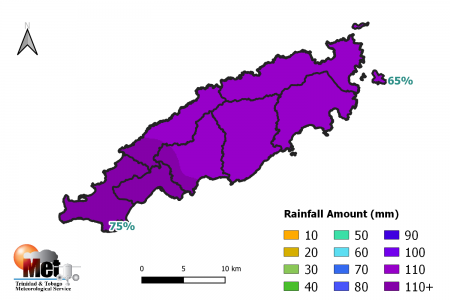 The sun is presently at 10.5 degrees south latitude and with this position, the day-length or number of sunlight hours in Trinidad and Tobago from October 21st will be 11 hours 50 minutes, reducing steadily to 11 hours and 43 minutes by the 4th November. During the days that may have patchy or partly cloudy skies and particularly during the hours 11:00 am to 3:00 pm, high solar radiation intensity will be experienced. Farmers must be proactive at these times to prevent heat stroke and other heat-related ailments from affecting young, sick livestock and seedlings. Therefore, sufficient shade and ventilation together with fresh cool water provided to livestock when necessary will be essential.

According to the moon phases, the 4th (New Moon phase) of November is a good day for planting aboveground crops, while the 21st, 22nd, 25th, 26th and 27th of October and 1st, 2nd and 3rd of November are good days for planting belowground crops. However, the 23rd, 24th, 28th (Third Quarter phase), 29th, 30th and 31st of October are poor planting days. These days should be used for removing weeds, clearing land and ploughing fields.

Farmlands in Trinidad and Tobago received mostly low to moderate amounts of rainfall during the last dekad (11th-19th) of October. During this third fifteen-day forecast period of (21st to 4th) October/November, expect slightly more rainfall amounts to occur as compared to the last fifteen-day 11th to 25th October forecast period. Mostly sunny mornings will give way to increasingly cloudy afternoons and evenings with wetter conditions mostly on the northwestern, western and southwestern parts of Trinidad and southwestern Tobago. The light winds and moderate to high rainfall amounts in this second fifteen-day period of October will sustain below average evaporation and evapotranspiration rates overall.

River levels will move from moderate levels to high levels at times, particularly on wet days. Therefore, farmers should remain prepared with necessary flood alleviating actions such as using portable water pumps, sandbags and elevated structures on the ground to store animals, seedlings, machinery and other equipment.

A mixture of dry and wet conditions occurred across Trinidad and Tobago. The 13th, 14th, 18th and 19th of October were rainy days, while on other days mostly sunny conditions with few showers prevailed. Mostly very warm days, warm winds and low/moderate river levels and moderate moisture content in soils may have stimulated crop growth and development in agricultural lands and vegetation growth in pastures. The rainfall totals maps for the period 11th to 19th of October for Trinidad and Tobago are located below as figure 1 and figure 2. 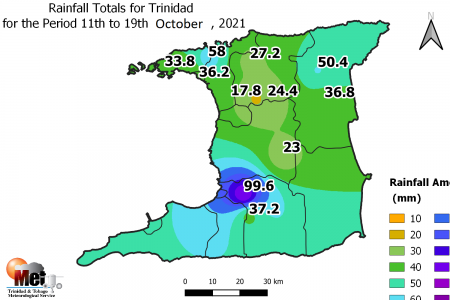 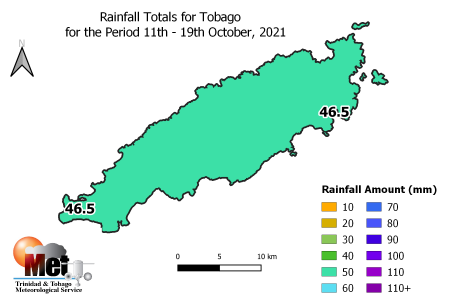 Temperatures remained very warm to hot during the period as maximum daytime temperatures ranged between 32.5 ⁰C and 33.8 ⁰C, in Trinidad.

In Tobago, temperatures were warm to very warm, with maximum daytime temperatures ranging between 31.7 ⁰C and 32.8 ⁰C.