La Niña Remains, Expected to Continue Into the 2022 Wet Season

La Niña Remains, Expected to Continue Into the 2022 Wet Season 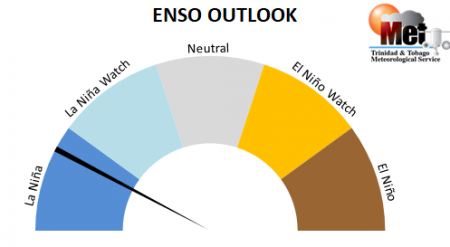 Over the last four (4) weeks, sea surface temperatures (SSTs) remained below-average, but strengthened slightly in the central-eastern equatorial Pacific, with the main oceanic and atmospheric variables remaining consistent with La Niña conditions. A large majority of the models forecast SSTs to remain below-normal at the level of a weak La Niña until Jun-Aug 2022 with decreased probability. Consequently, the TTMS’s ENSO Outlook maintains La Niña conditions.

What does this mean for Trinidad and Tobago?

Historically, La Niña tends to increase cloudiness and the chance of above-average rainfall within Trinidad and Tobago, but not always. It is likely that La Niña will influence local rainfall during June-July-August 2022.

Guide: A La Niña (El Niño) is declared when the average SSTs in the central and eastern equatorial Pacific Ocean become at least -0.5oC cooler than average (0.5oC warmer than average) in the preceding month and the cooling (warming) is expected to persist for five consecutive overlapping three-month periods. This must occur together with a corresponding change in the overlying atmospheric circulation. The TTMS’s La Niña/El Niño Watch is activated when the ENSO Outlook indicates a probability of approximately 50% chance or greater for development of La Niña or El Niño.